During the first week of my internship at Sequence, I was sleeping on the floor of my cousin’s apartment. I mention this because I think feeling like a visitor really sums up most internship experiences. When only working at a company for three months, it’s easy to convince yourself that you’re a nuisance. You don’t want to ask for anything and you really don’t want to do anything wrong. Since I am certainly not one to do everything perfectly the first time around, I was more than a little nervous walking into Sequence on my first day. 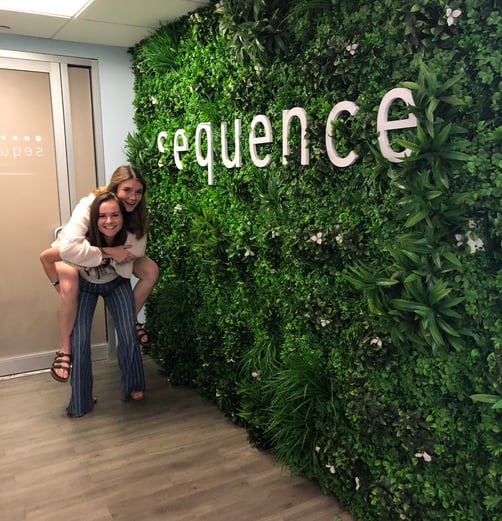 When I got to the office, I was immediately welcomed with smiles and sincerity. I was led to a desk that was sprinkled with gold confetti, a Sequence University employee handbook (yes, even the interns receive employee handbooks), and last, but certainly not least, a dessert from a nearby trendy french bakery. Next, I walked around the office for team introductions before being led into a conference room for the first of a few orientations. I was still sweating from how hot it was that day, but at least it wasn’t from nerves!

Since my friends were all interning as well, I heard a few internship horror stories, but fortunately couldn’t relate. I was making mistakes as well, but working at Sequence was teaching me that confronting mistakes after making them was crucial to the never-ending learning process of the professional world. In one example, I was tasked with ordering an oversized cutout of one of our team members’ faces for her going away party (lol, just intern things). Unfortunately, I misread the production time, and the item I needed in 36 hours wasn’t going to be ready for 4 days! I felt like the world was ending (which, according to my mom, was a bit dramatic). When customer service explained that there was nothing I could do, I sucked it up and told Gabby (my super cool boss). She said that it was no problem and suggested I reach out to a contact of ours who would be able to do it overnight. After making sure I was able to get in touch with our contact, Gabby actually thanked me for working with her to find a solution. This minor fiasco made me want to do better as an intern -- not only because making a mistake isn’t particularly fun -- but mostly because of how much respect I had for the way we worked together to find a solution.

In another example, I put my courage on display by speaking at my first staff meeting (which coincidentally happened to also be my first day). My introduction was met with encouragement, positivity and even some questions! For someone who doesn’t particularly enjoy public speaking (my face turns BRIGHT red and my mind goes blank) this reception couldn’t have made me feel like more of an SEQ’er.

Speaking of questions, any time I had one, the person I asked made time to not only answer it, but to make sure I truly understood his or her answer. In my opinion, this quality, among many other great ones, makes Sequence an exceptional company to work at. It isn’t common that a company is comprised entirely of people who are authentic in their words and thoughtful in their actions.

As I am now in my final few days of my time at Sequence, I really just want to say thank you. I could not have dreamed up a better opportunity to learn about the world of event planning and could not be more grateful to everyone that works here. Hopefully everyone had as much fun getting to know me as I did them, and I will 100% be back to say hello (with bagels, of course). N-Y-C you later!