Survival of the Fittest, SEQ-Style

If you've been keeping up with anyone at Sequence lately (and seriously, who's not following us on Twitter these days?) you probably know that we've been in the midst of our worst event yet.  Normally it takes quite a bit for me to complain about an event, but this one is large, it's thankless, and it doesn't pay a dime.  It's the dreaded office move.

Truthfully, the entire process has taken an inordinate amount of time, but up until last week I was ready to label it a success.  Contractor was great.  Moving company was solid.  We probably helped Staples make their quarterly numbers with all the bubble wrap we purchased.  Best of all, the move was prompted by expansion, so the light at the end of the tunnel meant more space and more privacy.  Everything was going according to plan.  And then Verizon showed up.

Hearing someone gripe about a customer service experience is only slightly less boring than hearing someone talk about their fantasy football team so I'll spare you the details. But what I will say is that as of the time you're reading this post we've been without Verizon's wonderful internet service for seven days and counting.   Seven days for something, that in today's world, is probably somewhere in between food and oxygen on the necessities pyramid. 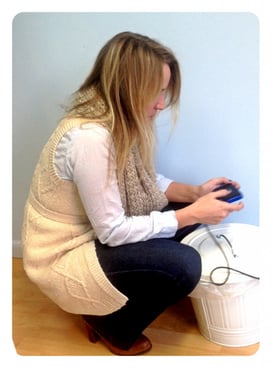 Faye having a heart-to-heart with Fin, our finicky WiFi card, during one of his frequent meltdowns.

Our saving grace? A temperamental WiFi hotspot device that - when it works - offers a speed that brings me back to my dial-up days.  It allows up to four users at a time which is a major convenience, unless of course you have more than four users.  In that case you better be smart, quick and ruthless. The new SEQ office has turned into a modern day version of survival of the fittest.

I bring all this up because sometimes you gotta gripe.  But also because it is yet another reminder of how contingent our lives and our businesses are on technology, and more specifically the internet.  Having a sporadic connection and/or limited bandwidth forces you to be incredibly resourceful (putting it kindly), and no internet access for any significant portion of time means you've got a major problem (putting it even more kindly).  It's pretty common these days to read stories about digital detoxing, but what about when it comes to your business? What percentage of your workday are you online? How effective or successful could you be if you were forced to work offline for days at time? It's a hypothetical that might frighten you, so  just make sure you're able to tweet about it afterwards.