For those of you who don’t know, Ryan’s World is a YouTube sensation that features Ryan Kaji, his parents Shion and Loann, and twin sisters Emma and Kate. Ryan’s World is one of the most popular YouTube channels in the world, typically releasing new kids-centric video content daily, some of which have over 2 billion views. The franchise recently surpassed 30 million subscribers and sought out a way to celebrate both the success of the channel and the fans that contributed to this achievement. Ryan’s World had never dabbled in the virtual world of interactive events... until now. Enter Team SEQ! 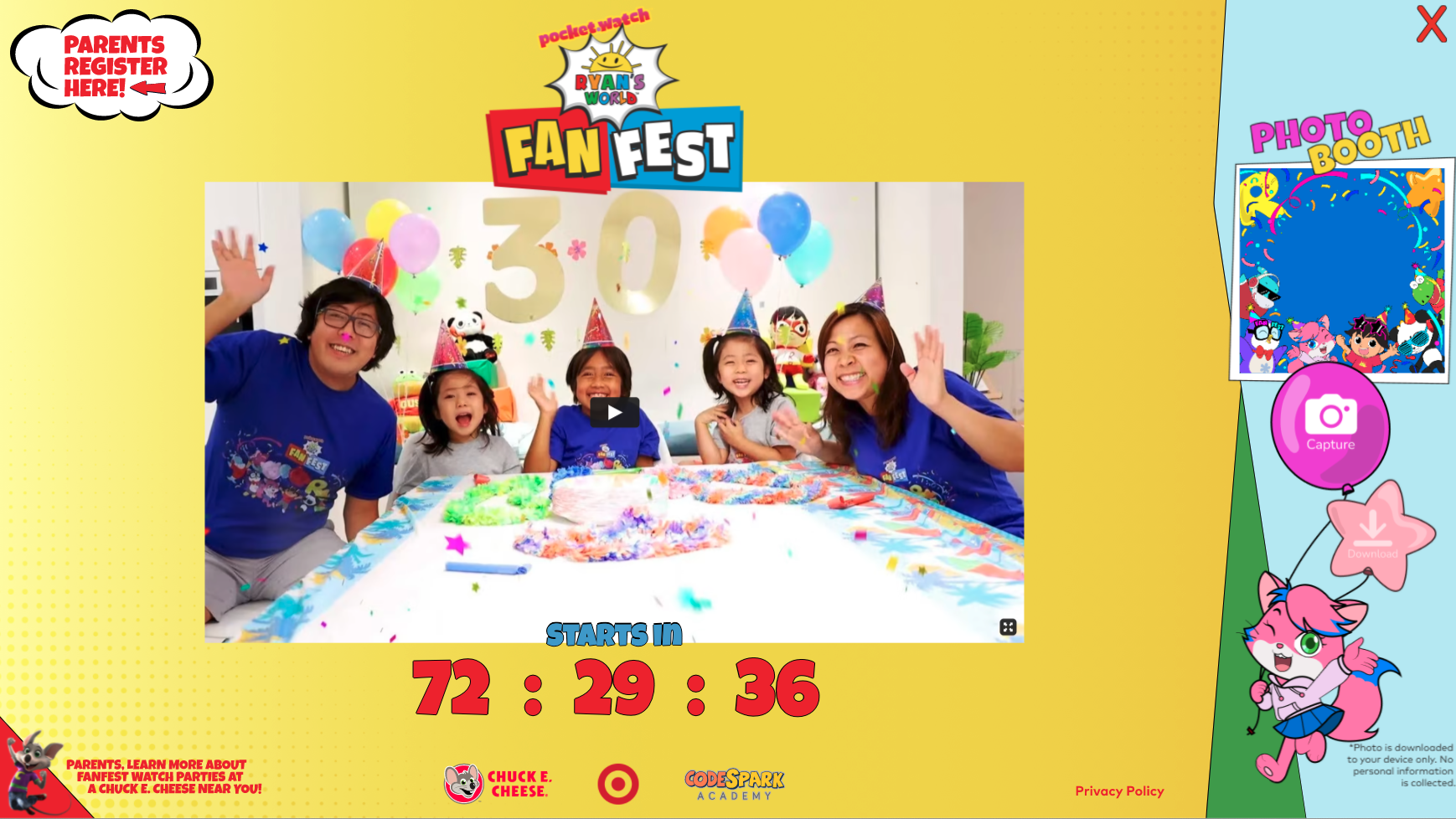 Sequence partnered with pocket.watch, the Kaji family’s digital agency, to bring the first-ever Ryan’s World FanFest to life. The family-friendly, fully free, and public event was developed, edited, and launched in just a few short months. The hour-long virtual extravaganza took fans on a mysterious journey with Ryan, the entire Kaji family, and many special guests as fans explored a new dimension — Ryan’s Multiverse! The experience premiered just a few short days after their float premiered once again in the iconic Macy’s Thanksgiving Day Parade. The goals for the event were to make young fans feel like they were playing alongside Ryan in real-time, promote new products designed by Ryan, and expand Ryan’s fanbase. Additionally, Sequence was tasked with creating an interactive virtual experience for the franchise, something that Ryan’s World had never done before. We couldn’t wait! 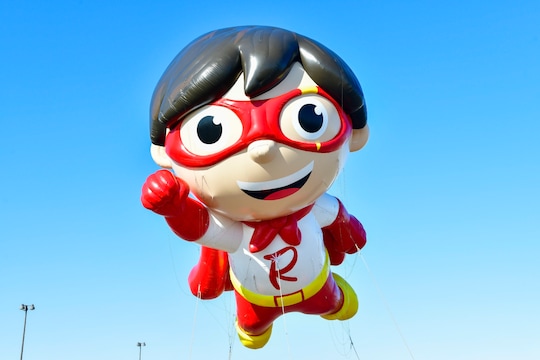 Our Sequence team was instrumental in creating an immersive Multiverse experience from start to finish. We built the concept from the ground up; ideating beyond video to create an event-worthy experience, the full storyline concept, and building out many interactive elements to align with the video content. The storyline was based on an endless Multiverse hallway, speaking to the breadth of the Ryan’s World brand as well as its future development. 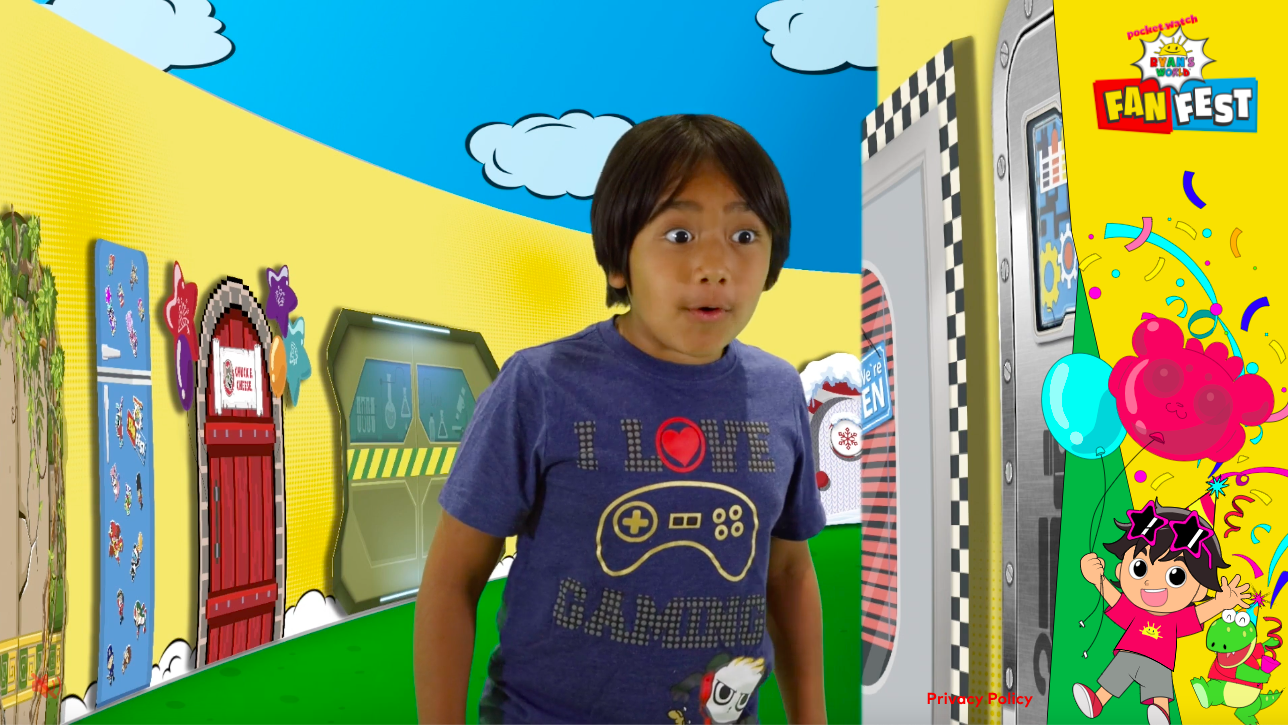 We designed a full suite of creative assets to bring the FanFest experience and Multiverse to life. In collaboration with pocket.watch and their additional creator talent, we developed organic ways to intertwine appearances from special guests throughout the show. Additionally, we deployed a robust editing process to blend family-provided green screen footage, with our CGI backgrounds, along with animation from Sunlight (the family’s production team), and all the characters Ryan’s fans know and love. Altogether the event immersed fans in a multi-layered, brand-focused, and seamless Ryan’s World experience. 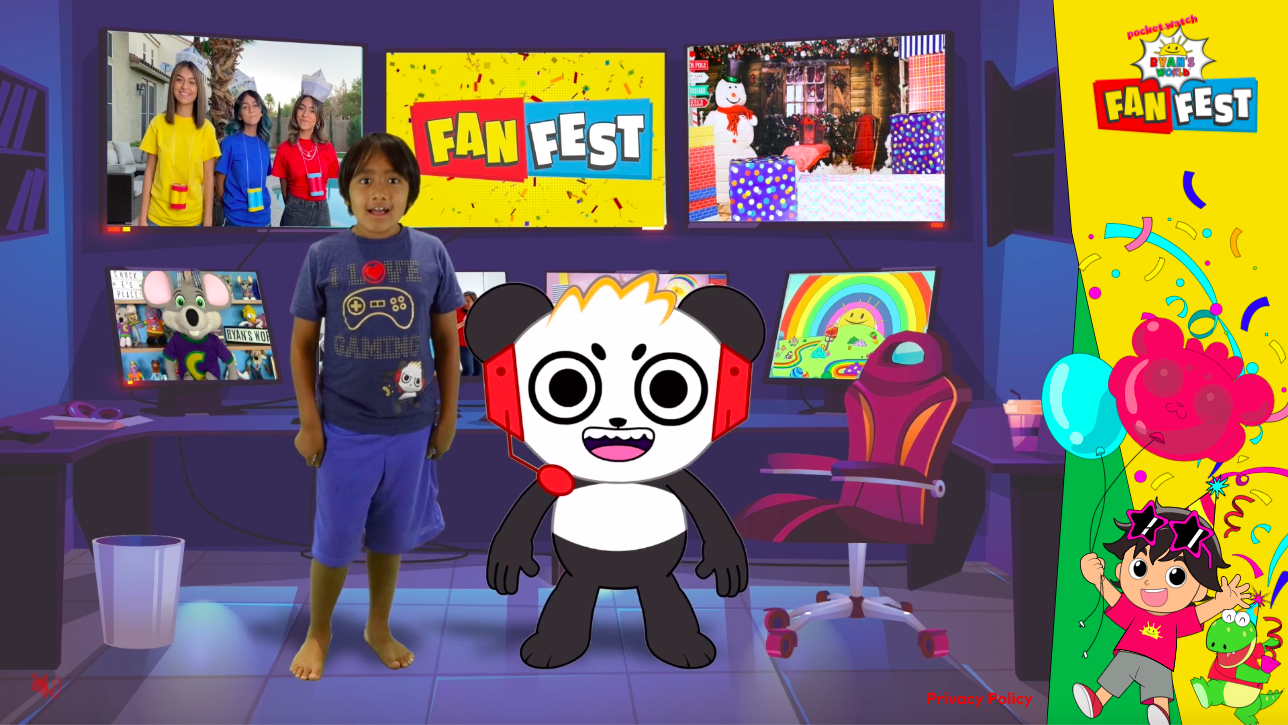 One challenge that our team faced was acquiring footage from real Ryan’s World fans to feature in the pre-recorded show while working within COPPA compliance guardrails to ensure a fully safe online experience for kids. Creatively this was a must with the experience being a FanFest! To work within the guidelines, we invited parents to RSVP and to opt in to send in footage of their super fans weeks before the show. This allowed us to feature these submissions thematically throughout the event, making for a more relatable and fun experience for kids and their families watching all over the world. 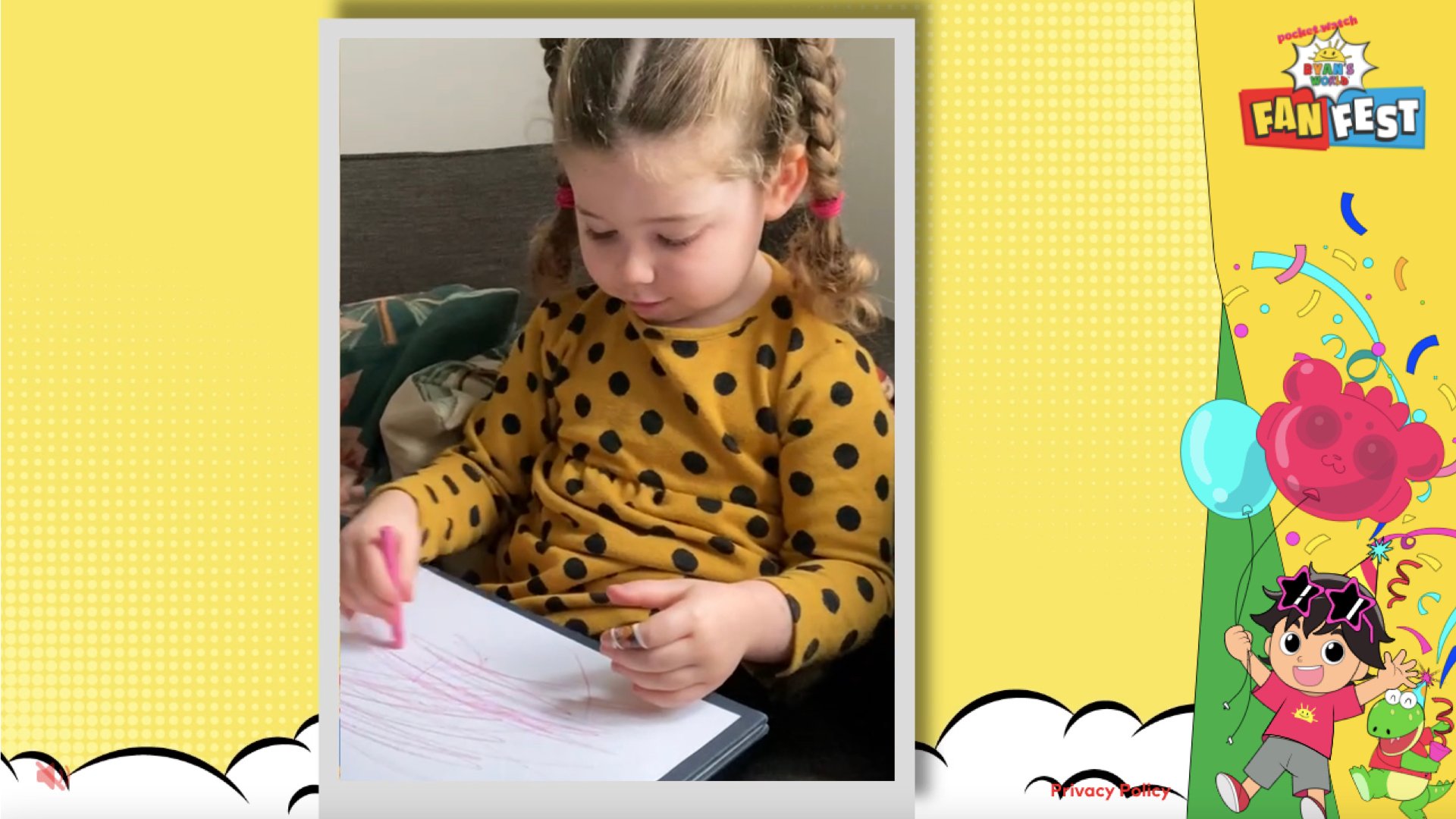 With this being the first time Ryan’s World and pocket.watch explored the events world, Sequence brought our expertise and focused on this as a fully integrated event versus just a content-creating exercise. Sequence worked with our partners to create a custom-built online platform for the event which included fun real-time interactions for the audience such as a photo booth, downloadable games, and DIY activities and crafts to explore before the experience. During the show, the platform encouraged the audience to interact with the video content, helping Ryan make decisions along the way and react to the on-screen moments with a completely custom emoji stream powered by the sounds of their own cheers! The audience was able to build a custom wishlist of toys featured throughout the show, with the opportunity to download the wishlist after the event. These unique interactions made the audience feel like an active participant in the show, playing alongside Ryan. The platform and the event were designed for non-readers and utilized simple UX with voiceovers throughout. A win-win for fans, the brand, and our team! 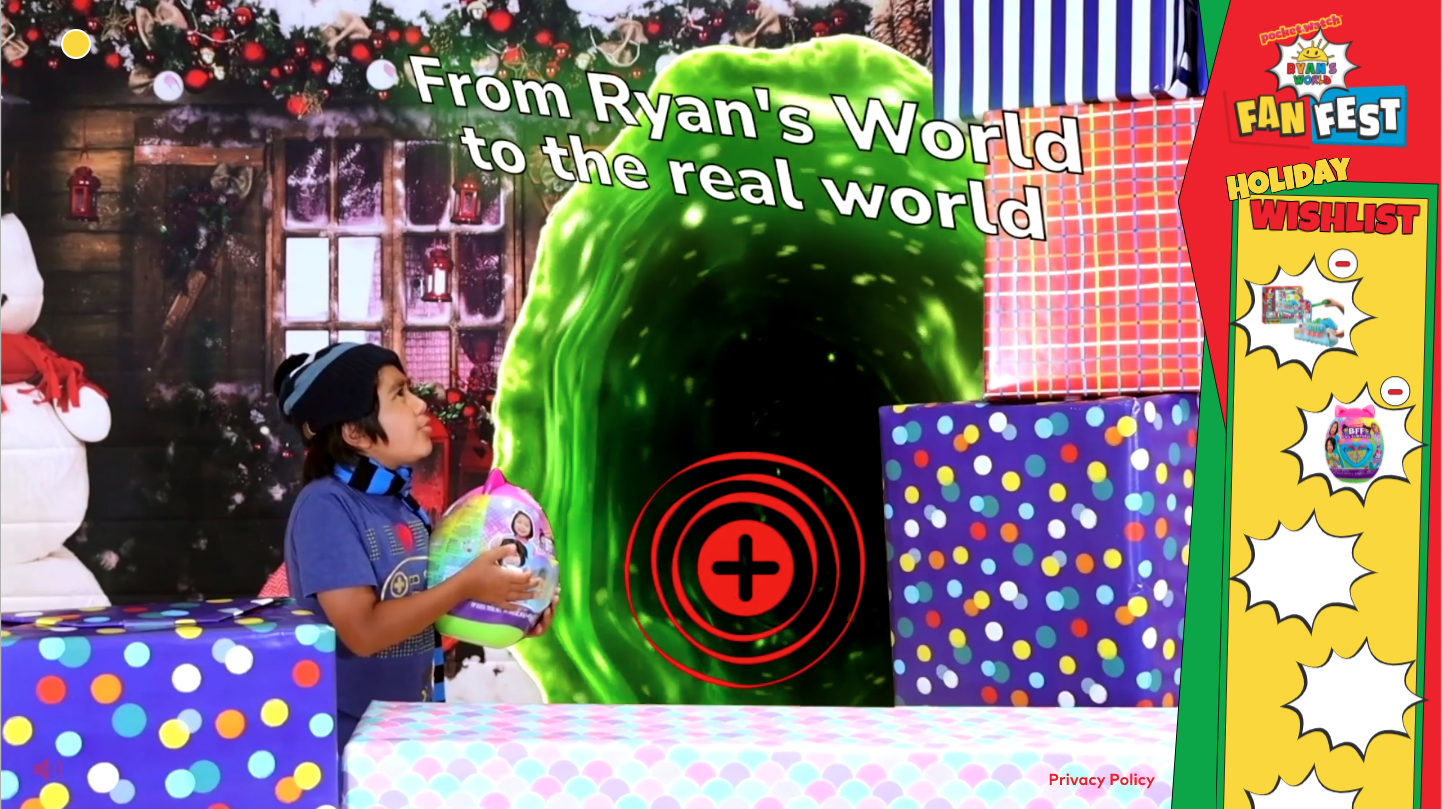 This was an incredibly successful virtual event experience that has not only grown the Ryan’s World brand, but also allowed our team to be kids again and join in on the fun!

If you are interested in learning more about how Sequence can bring your next event to life, reach out to us for a free 30-minute consultation. We can’t wait to connect with you!